The content provided on this page supports model development. These are not official NWS products and should not be relied upon for operational purposes. This web site is not subject to 24/7 support, and thus may be unavailable during system outages. 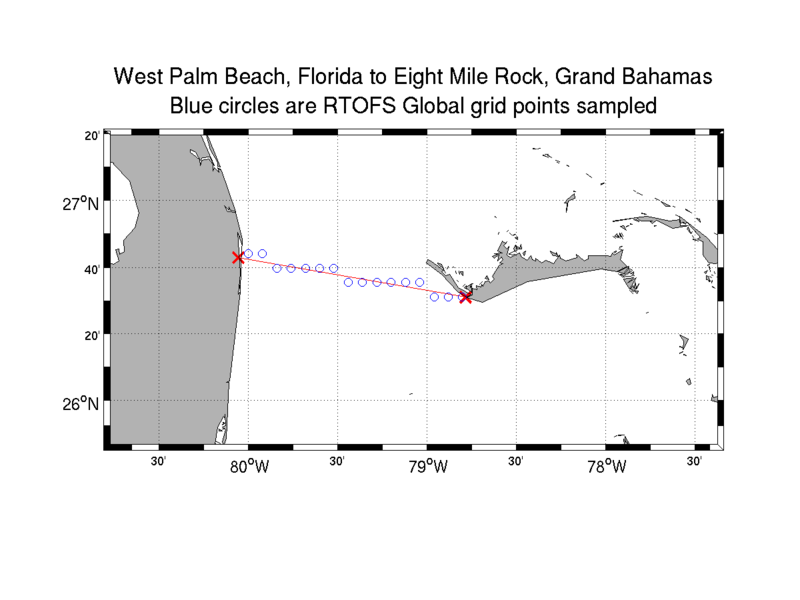 The Florida Current is a strong oceanic current flowing northward along the eastern coast of Florida carrying warm tropical waters that eventually feed the Gulf Stream. The Florida Current represents both the western boundary current for the subtropical wind-driven gyre as well as a return pathway for the Thermohaline Overturning Cell, which consists of a slow circulation redistributing the waters of the world ocean based on sinking at the high latitudes and upwelling elsewhere. The Thermohaline Overturning Cell has been documented to have strong impacts on the global climate, and as such variations in the Florida Current, which returns surface waters to the northern North Atlantic, represent an important climate signal to be monitored. Since 1982, NOAA has recognized the importance of long-term monitoring of the Florida Current and it has funded a project to monitor the transport variations of the current using a submarine cable and snapshot estimates made by shipboard instruments. (from the NOAA/AOML Florida Current Transport Project introduction)

For more information on the Florida Current Transport Study including background information and access to the data, visit the project homepage.

The Florida Current cable and section data are made freely available on the Atlantic Oceanographic and Meteorological Laboratory web page and are funded by the NOAA Office of Climate Observations.